The Chinese brands are becoming more popular abroad and can quickly take up on the bigger settled brands like Samsung, Sony or even biting off a juicy bit of the Apple’s market share on their home ground – US.

With a population of 1.37 billion, China remains the world’s largest market for phones, having surpassed the United States last year, and only furthering its growth. According to the International Data Corporation (IDC), more than 80% of China’s 885 million phone users are now using smartphones and the Chinese smartphone market is expected to grow at 10% this year.

Despite high iPhone sales in China, a new trend can be observed on the market: a growing popularity of Chinese-made smartphones such as Huawei, Xiaomi, OnePlus, Smartisan, Coolpad, and Lenovo. These companies focus on selling a good-quality and low-cost phones that run the Android operating system.

The biggest advantage the Chinese manufacturers have over other phone makers in the global market is cheap labour that keeps their manufacturing costs down. What is more, they don’t pay the patent and intellectual property royalties for smartphone sales within their country. Reducing the costs enables Chinese vendors produce phones in higher volumes and at lower costs.

Top 5 Chinese smartphones that are available on the global market:

Food for thought: GfK’s forecast shows how the dynamics of global smartphone market is switching to “emerging markets”: 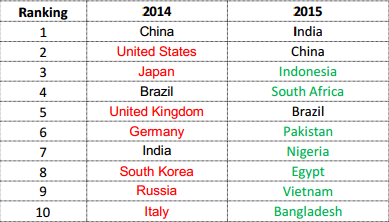 X
Facebook uses Author TagseCommerceThis is good news for journalists and bloggers, and publishers Following the introduction of Instant Articles, Facebook is coming up with a new way fo…

Chinese the king of smartphones

X
iStation wants to debut in WarsawCompaniesThe company plans to instal over 100 iStation points in the capital city of Poland Imagine yourself jogging or cycling and not having to carry a bottl…
ITKeyMedia use cookies to give you the best experience. If you continue reading our news here, we will assume that you are happy with it.OkRead more