SuperMeat a biotechnology startup, is planning to revolutionize the meat industry, by ushering in the biggest change to the way people consume food since the dawn of the Industrial Age. Together with top researchers and scientists, SuperMeat is developing in vitro meat, that would replace the meat consumed worldwide on a daily basis. The startup is launching a crowdfunding campaign to create the first device in the world to grow a whole chicken breast.

The company was founded to address the technological and ecological challenges in feeding a growing global population. SuperMeat is powered by an ideologically and scientifically driven effort to create a humane, animal-free solution for nutritional security, which will drastically reduce carbon emissions and increase food safety worldwide. Cultured or “clean” meat offers the ability to grow traditional meat products from animal cells, taken without hurting the animal itself, using less water, and producing much less greenhouse effect gas, and controlling much more accurately the properties of the meat itself, as well as the hygiene in the production.

However, current cell culture techniques, developed over the past 50 years for research, are incredibly wasteful and translate to a lower bound of $100,000 to $50,000 per kilogram. SuperMeat’s technological solution is to organically grow meat in devices that mimic natural animal physiology, permitting cost-efficient meat production, free of animal serum (such as fetal bovine serum), and as a result, a meat indistinguishable from conventional meat in terms of flavor and texture.

“We founded SuperMeat to revolutionize the food industry, and promote an animal-free humane solution to world hunger and environmental degradation that will secure a better future for our children,” said SuperMeat CEO and Co-Founder, Koby Barak. “Our team is comprised of a diverse group of advocates, scientists, health professionals, and environmentalists, coming together to create an incredible and truly groundbreaking device that will grow real, tasty meat, with zero animal suffering, and reach the market within five years.”

The company is working towards the distributive manufacturing of cultured meat, designing devices that could be placed at grocery stores, restaurants, and ultimately in consumer homes. 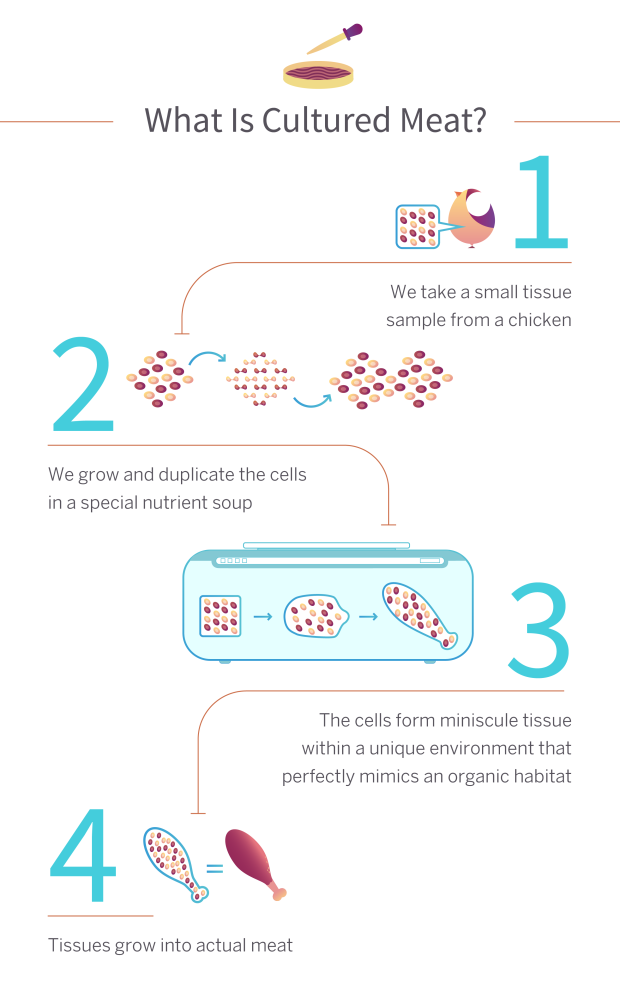 SuperMeat’s devices will open the door to an affordable and sustainable source of food, helping to end agricultural animal cruelty, and mitigating negative environmental and public health effects associated with chicken agriculture and consumption.

With the help of their Indiegogo campaign, SuperMeat predicts to have created the first ever cultured chicken meat in two years . Enough time to think of the unanswered question : if you consume the super meat, are you a vegan or not?