You are at:Home»Events»TNW 2022 Spotlight: The Audio Metaverse

On June 16-17, Taets Arts and Events Park in Amsterdam welcomed The Next Web’s TNW Conference 2022 Expo. As usual, the organizers put together an extensive list of world-renowned speakers from famous companies and organizations with the central headliner being no less than Edward Snowden who needs no introduction (watch his discussion with Gavin Wood of Web3 Foundation about trust and transparency in the metaverse era).

However, ITKeyMedia remains CEE-focused. As such, our spotlight falls on Michał Marcinik, the founder and CEO of the Polish-British adtech AdTonos, and his presentation of the Audio Metaverse.

Mr Marcinik kicked off his presentation with the fact that the very first experience of every person has to do with hearing – their mother’s heartbeat. As such, the principle that the sound is the most important source of experience lies at the very core of AdTonos’ philosophy.

The Beginnings of Audio Tech

The speaker pointed out that the audio evolution has been a big driver of the tech evolution for many years. Hard disk, bluetooth, wifi, IoT, and even the metaverse itself owe their invention to the audio evolution. Even though Thomas Edison is primarily known for the investigation of lightbulb, Mr Marcinek reminded that he also invented the phonograph – a machine for recording voice, i.e. storing data.

Less than 20 years later, Guglielmo Marconi successfully experimented with wireless terrestrial transmission. This eventually contributed to the introduction of the mentioned bluetooth, as well as TV, Radio, and mobile communication.

In 1933, German company AEG introduced the magnetophone for storing music, but later this technology was used for storing and transporting data – for example, for Atari or Commodore 64. Next, commercial magnetic drum memory – another hard disk predecessor – was introduced by IBM in 1950. In 1979, Walkman was introduced and made audio portable.

Thus audio consumption became a personal experience, among other things, creating a personalized audience for advertisers. According to Mr Marcinik, digital audio marketing has become the fastest growing ad channel in Europe. Since then, audio content is consumed by everybody who can do it. 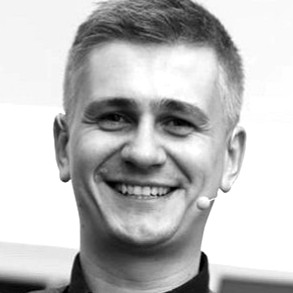 The next step is to make it interactive. This is the job for smart speakers which are also increasing in popularity at a dramatic pace, as the speaker noticed. According to his information, there will be more smart speakers in an average family than coffee machines soon enough. That’s why, he deduces, we are entering the age of audio, and it’s high time for a leap in the development of audio tech.

‘Audio is a medium for recording information and identification: national anthems, football clubs anthems, etc. There is also a saying ‘our song’ with couples that report a higher relationship intimacy,’ Mr Marcinik continued.

He quoted British scientist Olivier Sacks who insisted in his Musicophilia on the mnemonic power of music, i.e. that audio can hold great amounts of information in the mind. Music or audio signals trigger specific sets of data in our minds.

As such, Mr Marcinik is convinced that in order to immerse oneself into the metaverse truly, one should simply put the headphones on. Indeed, it’s difficult to imagine proper implementation of the metaverse without the right layer of audio. This is further propelled by the fact that audiences have never consumed as much audio content as they do today.

As for audio advertising, the speaker pointed out that it should no longer be perceived as radio advertising. It’s not ‘spray and pray’ anymore but rather data-driven, measurable, targeted, etc. Moreover, there is the marketing phenomenon of ‘sonic branding,’ a company can have an actual ‘audio logo’ where a particular sound sequence gets stuck in one’s mind like a pepper earworm and at the same time strongly associated with a brand.

AdTonos’ take on this is their solution called ‘audio pixel.’ It is an audio bit that they can weave into the content (for example, place an ad of a product when a user abandons another product on an ecommerce website or into the soundtrack of a mobile game) and measure the details about its impressions and efficiency. Further, the user can effortlessly purchase the product (as well as book a test drive or fulfill any other call to action) through their voice assistant, which is far easier than clicking and following links.

‘Audio will spin the wheel of tech evolution,’ Mr Marcinik summed up. Audio content indeed represents one of the few remaining instances of unchartered waters and untapped possibilities. Audio ads are merely a tip of the iceberg, only one of the possible ways to embed and employ audio content.