You are at:Home»CEE Startups»Dynamic Air Cooling — The Revolutionary Technology from Poland to Beat the Global Warming

When the traditional air cooling systems present significant risks for the planet’s wellbeing (the main hazard are HFC freons – super greenhouse gases, considered as 4000x more dangerous than CO2), a startup from Poland attempts at a more ecological way to generate cold for industrial or residential air conditioning.

ITKeyMedia had a pleasure to meet Pavel Panasjuk, CEO and Co-founder of DAC, Dynamic Air Cooling, who shared his vision of the future of air conditioning and refrigeration as well as unveiled the hidden hazards of the current technologies that are used globally:

“You see, the problem of cooling is not that obvious in everyday life,” Pavel tells ITKeyMedia. “The traditional vapour compression cooling has been proved quite effective given its original purpose. However, not everyone knows that (…) in order to generate cold we have to burn fossil fuels (already a source of CO2) plus we use dangerous freons – which creates double pollution of the atmosphere,” says Pavel.

Dynamic Air Cooling (DAC) is a participant of Brinc’s Spring ’20 Poland ScaleUp Accelerator Program. DAC is a startup which offers the original patented technology of air cooling, able to decrease the temperature by 60 degrees while being highly energy efficient.

The concept of DAC was inspired by the necessity to replace the dangerous coolants of traditional cooling technology. According to DAC’s CEO, 85 percent of the current devices have to be replaced by 2035, or 27% of global warming will be caused by air conditioning and refrigeration.

The company advocates for a change in refrigeration. With traditional air conditioning proved to be harmful, innovations like DAC demonstrate that air conditioning can be simpler, less harmful to the planet, and more accessible to the client.

DAC is a startup with 6 full-time members and 3 external advisors. Their international team works in three countries, which, as Pavel shares, did not prevent them from having successfully planned important modifications to the device, filed a new patent application, and leveraged investors. Founded in 2019 in Poland, they had already patented their technology in 2017 and their research history took off in 2015.

Due to their participation in the Brinc ScaleUp Program DAC received an opportunity to work with Sescom – which is currently seen as their potential investor and business partner. The companies share one mission to support environmentally friendly solutions in the innovations and technologies for sustainable development. Sescom has recently announced the launch of HGaaS project (Hydrogen Generator as a Service), in which they collaborate with local renewable energy businesses. 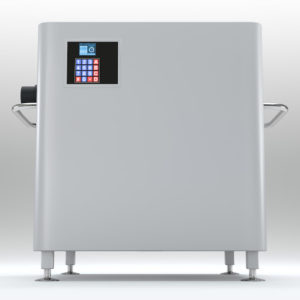 Founded in 2015, they started experimenting and by 2017 gathered enough information to build their first prototypes. “Even laboratory devices proved to be quite effective – we managed to decrease the temperature by 50-60°C within seconds from the start of the operation”, says Pavel. They applied for their first patents and started the especially intense testing: they built over 10 prototypes, each of them with lots of adjustments and modifications, which would bring them closer and closer to the desired result.

“In mid-2018 we understood that we will not be able to finance all RD works by ourselves and went public with information about our project”, shares Pavel. They presented at several events and got great feedback. One of such presentations led to an invitation to participate in the Poland Prize program, which was an opportunity they gladly accepted and established the company in Poland in 2019. 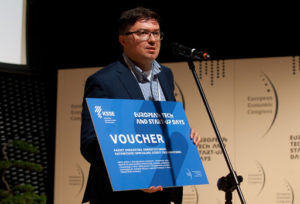 Pavel believes that the cold market is one of the few markets, where a change in technology is required not only by internal drivers but is directly imposed by legislation and intergovernmental agreements:

“Such a change is called HFC phase-down and it is outlined in the Montreal Protocol and Kigali amendment. If I put it in one sentence – 85% of all HFC devices MUST be replaced within the next 10-15 years. It means a huge opportunity for technologies offering clean cold,” he says.

The potential business partner and investor in DAC Sescom sees the market of the future to be strongly influenced by 2 megatrends: sustainable development and intense growth of technology. Sescom believes that the future belongs to “a strongly decarbonized market with an ecosystem of small green energy producers spread across Europe ”, – Agata Szulc, Chief Strategy and Communication Officer of Sescom told ITKeyMedia
With climate change making the issue rather urgent, DAC’s business plan is to out-license its technology to other manufacturers in order to scale. Just like Sescom, DAC aims to deliver value to its global customers, ensuring high energy efficiency.

“At the moment we focus on several agreed pilot projects and look forward to presenting their results to the market,” says Pavel. The company’s plan is to achieve direct sales to the already identified B2B customers.

“Global warming leaves no doubts – we will need more and more cold and refrigeration devices. Not only for comfort but for mere survival in hot climate zones,” says Pavel. He anticipates the market size will continue to double every year, however, more significance will be given to “clean and alternative cooling solutions, as well as improvement of electrical efficiency of cooling devices”. Pavel believes the global population is about to witness a boom of AC and refrigeration devices like Asia, Latin America, Africa, which used to be unpopular due to very high expenses. “Global warming leaves us no choice, but to look for cooling solutions,” he sums up for ITKeyMedia.

NB: DAC is a holder of the SpeedUp grant and the seal of excellence in Horizon 2020, winner of prizes at Prototype program (EU Startup festival), Acceleration (Poland Prize), PPAC, and Sustainable Fast Track of the UK government.

Irena is a Ukrainian writer and translator living in Estonia. Graduated from Tallinn University with an MA in Humanities in 2019. Dedicated to raising environmental awareness in Eastern Europe and bringing global readers together.