You are at:Home»CEE News»New Innovation Centre in Warsaw: CIC Opens its Doors

As time flies at a rapid pace, more and more ways to keep up with it come into play. One of those is the Cambridge Innovation Center, or shortly CIC. This company provides conditions for making a successful business between venture capitalists, innovators, and other stakeholders. It includes co-working spaces, flexible offices of high quality, and other options that simplify the working process. Notably, Android, the most popular mobile operating system in the world, was developed in the first CIC center in Cambridge. Microsoft, Loreal, IBM, and Amazon are among other companies and start-ups that cooperate with CIC. The company has offices in many cities, like Cambridge, Miami, Tokyo, Rotterdam, and this May, CIC has opened a campus in Warsaw.

“CIC acts as an “enabler” and supporter for innovations in all regions of the world where it has its operations. Our goal is to enable innovations to grow in our sites by connecting innovators, venture capitalists and other stakeholders and making things happen. The “connection” element is most important as it opens opportunities for various players to interact with each other and build innovations together”

CIC Warsaw is the first campus opened in Central and Eastern Europe. Jerzy Brodzikowski, the General Manager CIC Warsaw, said to ITKeyMedia that the reason why CIC has been opened in the Polish capital is that Warsaw is the most important business hub in the whole CEE region. Thus, it was a natural choice for CIC to become a part of the growing Warsaw ecosystem. CIC Warsaw is located at the highest skyscraper in the European Union, VARSO TOWER, which is in the heart of the city.  Its investor is a real-estate company, HB Reavis; Gleeds Polska, a company that provides services in the field of investment management, supported the arrangement and finishing of CIC. For now, the CIC Warsaw campus includes several sections, each of which provides the necessary conditions to work. 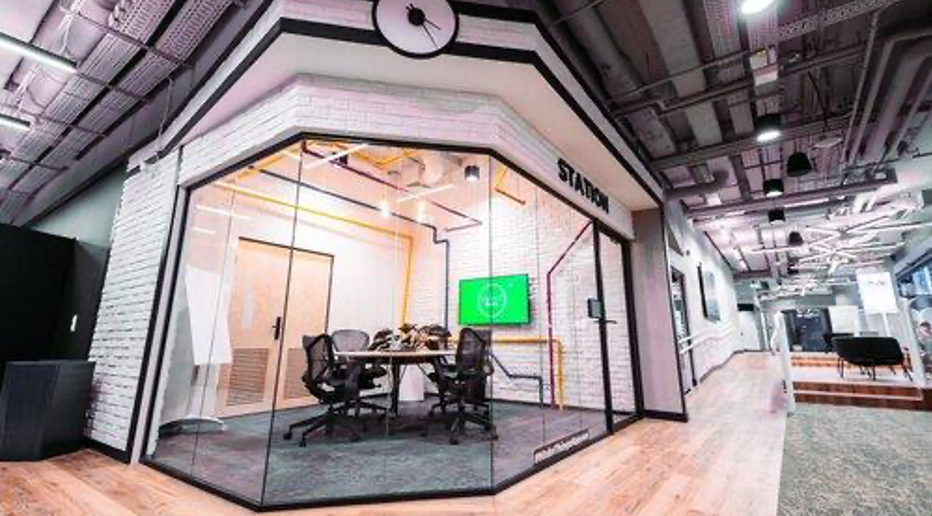 There are several sections at CIC Warsaw

The first three floors include a co-working space, offices, some meeting rooms, game rooms, prototyping spaces, and a wellness zone. Different specialists, like NGO representatives, scientists, entrepreneurs, start-up companies, investors, and others meet and work on various projects at the scale-ups floor, which is a so-called specialized industry HUB.

Yet, part of the first floor includes a District Hall, which is called the first public innovation in the world; it is operated by Venture Cafe Warsaw. “A client of CIC has the opportunity to find a potential business partner or VC investor through our global platform called “CIC Portal”, it has the opportunity to educate him or herself and their respective teams through educational programmes organized by the Venture Cafe Foundation at District Hall, make connections through our industry hubs [..] and even create 3D print outs in our Prototyping Terrace”, Jerzy Brodzikowski says. CIC Warsaw is currently developing a PropTech Hub, IoE (Internet of Things) Hub and Cosmic Hub and more in the future.

One more prominent place is the Trend House. It is a club for the top minds who meet and create innovative projects. However, there is an exclusive membership, which means that the most talented and active can enter it. The members are successful entrepreneurs, NGO decision-makers, investors, academics, artists, famous travelers, and others. Well-known members are Marek Kamiński, a famous explorer, Ewa Ewart, an award-winning filmmaker who specializes in documentaries, Aleksandra Przegalińska, Poland’s most famous expert on Artificial Intelligence, and Artur Kurasiński, an entrepreneur and public speaker and creator of Aula Polska. The Trend House offers an interdisciplinary program that includes virtual and physical educational grouped sessions. The club, along with the District Hall, is located in the Innovation Campus, a platform that builds, promotes, and supports innovation in the CEE.

Last but not least is the Investors Floor that is supposed to open on the 21st floor by the end of 2021. As the official website states, this is the space devoted to tenants from the VC sector. Investors will meet and collaborate on various projects concerning the investment market in Poland.

CIC Warsaw provides additional services that might be good for the visitors, like concierge services, fully equipped kitchens, cleaning and security service, and a high-speed Internet. Additionally, taking into account the current global health crisis, the safety conditions under which visitors can work are being met. For example, tenants receive special devices that allow them to open doors or use touchscreens safely. By the way, touchscreens are additionally covered with nano-septic coatings.

CIC Warsaw cooperates with innovative companies, small and medium enterprises, like technological startups, and venture capital investments that are part of an innovative ecosystem. Jerzy Brodzikowski admits that potential partners should have their core values aligned with those of CIC, which are transparency, honesty, trust, interactive experimentation, willingness to innovate, adaptability, and believing in a culture of “trial & error”.

The first tenants that started working at the CIC Warsaw are a training company Apexnet, an American medtech scaleup Precision Life, and an animation studio Pigeon Studio. As the Co-Founder and the Managing Director at CIC Poland, Izabela Górska, mentioned, with the expansion of the space, more people will work there. “Our main goal is to stimulate cooperation between innovators and free them from administrative office duties so they can focus on creating breakthrough projects,” she says.

Poland is a good place for business development. As the official CIC website states, “Now, as a way to increase Polish economic independence, the government has taken a stronger role in improving local entrepreneurship. They’re working to make it easier for small and medium-sized businesses to thrive, while also helping shift investment, both foreign and domestic, toward technology, energy, and fintech.” Many companies found their place in Warsaw, for example, office space and workspace solutions WeWork. Its spokesperson has admitted to us that such spaces are especially important during the COVID pandemic.

Indeed, according to the report commissioned by WeWork in New York, 76% of workers admitted that office setting is important for innovation and collaboration. “This is something we are also hearing from our members in Poland – people miss connecting with their teams in a physical setting, whether it’s discussing an idea over coffee or catching up with someone on the way to a meeting. Our communal spaces, barista coffee stations, and large meeting rooms are just a few ways colleagues can reunite and catch up in a safe way; we’ve spent the past few months adapting our spaces to reflect new social distancing measures and enhanced cleaning”, WeWork spokesperson told ITKeyMedia. WeWork has managed to expand its operations in Poland to five locations.

This flexible approach is a key factor of the WeWork business, “Flexibility is now the most valued currency in real estate, and in business – companies are looking to us more than ever for short term leases, and non-committal real estate agreements.”

The pandemic has undoubtedly changed the business culture, and it seems to be that it plays in favor of working spaces like WeWork and CIC. “Flexible office spaces, such as CIC Warsaw will begin playing a much more important role in the “New Normal” world as businesses will look for more flexibility in terms of office use – CIC came to Poland at a perfect time, when this office revolution began speeding up due to the pandemic we are currently finding ourselves in.” Brodzikowski told ITKeyMedia. Time will show how the Cambridge Innovation Center will be able to add value to the already developed coworking space market in Poland.