The post was originally published in Russian on Startup of the Day. Alexander kindly agreed to republish what we think is of great value to our readers.

In the middle of October, a festive occasion occurred in the Polish IT sector. A #startupoftheday Allegro went public. It is of no interest to describe its business model; Allegro is a local analog of Avito, and there are some slight differences in the products. I want to write about numbers, or, to be more precise, the current company capitalization that is $22 BLN.

I analyzed Allegro, Yandex, which is the Russian leader, eBay, and Google, the American public analogs, to check if this number is real. I wrote their indicators into a table, and then I added Tesla, as it is also considered a financial bubble, so I let it be there. 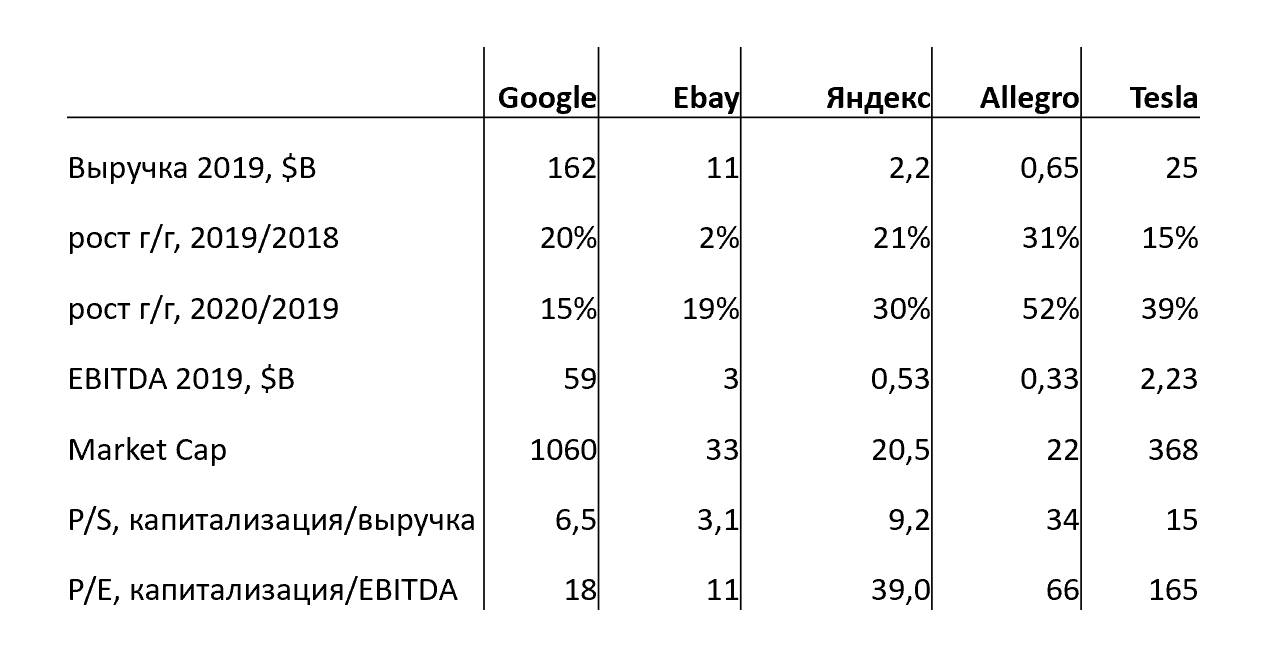 The first result is not about Allegro. It turned out that Yandex is trading better than Google. On the macro-level, it is good to deal with taxis and similar services; investors like it. Yandex has no other advantages over Google,  and yet, look at the results. On the micro-level, if you have stocks from Yandex but not from Google, then think how reasonable it is with such multipliers.

The second result is about the Poles. The evaluation runs high. Let us imagine that 2019 has always been indicative, and companies will be regularly developing at the same pace, but capitalizations freeze. In this case, Allegro and eBay will have the same value-to-revenue ratio in 2029, Allegro and Yandex in 2035, Allegro and Google in 2039.  In other words: Allegro’s assessment is based on 10-15-20 years of growth more than that of analogs.

You may object. Yet, 2020 ends and, as one may notice, in 2019, Allegro has accelerated, the rest have slowed down, and that is the excuse. I will object to the objection – neither the epidemy nor the quarantine will strengthen from year to year. We will come back to ordinary life, whether it is due to a habit or a vaccination; small businesses will set up, the role of ads and search will be back to normal. Moreover, the COVID growth that Allegro got was not for nothing. The expenses of the first 2020 half-year are +81 percent by 2019. There was nothing like that before.

There is another vision of capitalization. In 2019, Allegro’s gross merchandise volume was about six billion US dollars. By the way, it is a hundred times less than the Polish GDP. Only 1 percent of what the state produces goes through this service. What size can GMV grow to? The whole Polish trade is 230 BLN. Let half of it be online, and half of the half be under Allegro’s control. Actually, the share is actually smaller and does not grow. So, It will be 60 BLN.

This number is, so to say, 10 percent of the GDP, is four-time bigger than the sums of Magnet and X5. Still, Allegro will not grow more than ten times, and this path will take a minimum of 10-15 years, which is less likely to happen.

The share proceeds from GMV for the company has not grown over the years; the profit share from the revenue is falling. Thus, to imagine a positive future, we need to multiply them by ten. By this time, let us say, the capitalization will freeze. Well, then the company, based on multipliers, will be like eBay now. But eBay is now like that, and Allegro might be like that in 10 years! We assumed that the shares are not growing, so why keep them for so long?

And finally. Poland’s contribution to the world economy is 0.7 percent. Allegro’s – 1.2 percent of a Google and Facebook total capitalization, the two major virtual companies with Internet products. Even if to cross out China, it will not change anything.

That is the IPO.

Alexander made his career in Russian internet companies including Mail.Ru, Rambler, RBC.  From 2016 to 2018 he was Chief Strategy and Analytics officer in Mail.Ru Group. In this position, he worked on M&A, investments, and new project launches. In 2018 he became Deputy CEO in Citymobil, a Russian Uber-like company that was invested by Mail.Ru Group and Sberbank (the biggest Russian bank), then he left the company to launch his own projects.  Now Alexander is a co-founder of United Investors – the platform for co-investments in Russian early-stage startups. His blog #startupoftheday (#стартапдня) is one of the most popular blogs about startups in Russia.