As unpredictable as the market is, sooner or later any one of us may find ourselves in a financial crisis. What if we need to finalize some transactions and take care of unplanned bills before the payday? Usually, in that case, people turn to money lending companies for very expensive loans, often putting themselves in a debt spiral as a result. But the answer to the emerging problem with financial liquidity is quite simple – why not retrieve wages as you earn them, instead of waiting for the 1st or 10th of each month? That’s the “salary on-demand” model, supported by Flexee’s solution. 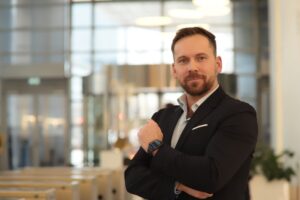 Some time ago, Andrzej Nowak, CEO of Flexee, noticed that the economy is shifting towards the on-demand model when it comes to various products and services, from music to food and transportation. Moreover, he observed that the mismatch between income and expenses is a growing social problem, touching over 50% of households. Therefore, being paid more frequently than once a month would greatly benefit them. The company’s CEO used his background in banking and finance to combine and address the two phenomena.

As a result, the Flexee app was created, allowing employees to access their earned salary whenever needed, any day of the month. As Andrzej Nowak explains:

“[In the salary on-demand model], the service is provided by a third party that automates the accounting processes for such advances, finances them, and together with the employer, provides employees with access to the service. Employers are key in this chain as they guarantee recovery of the funds paid, by deducting appropriate amounts at regular pay cycles, usually once a month.” 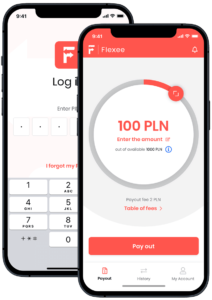 The app lets employees track how much money they already earned in a given month and how much they can withdraw. They need to provide the amount they desire to pay out and get it transferred to their account. On the other hand, business needs to sign a contract to make the Instant Pay benefits available to employees. The Flexee app funds salary payments on demand, thus ensuring that the company’s liquidity is not endangered. Only once a month, Flexee automatically settles accounts with the employer.

As Andrzej Nowak further explains: “Flexee’s target group are companies with at least 100 employees because they are the ones to whom the service is ultimately delivered – access to Flexee applications has basically no other limitations.”

The salary on-demand solution is still a novelty in Poland, but it has gained worldwide support. Artur Rzepka from JR Holding said: “The company conducted a study and found that, during the last 12 months, almost 40% of workers borrowed money ca. one week before their salary is being paid. Therefore, it is a large potential market in continental Europe, and in Anglo-Saxon countries, the popularity of this type of service is already growing rapidly.”

The financial safety net is the apparent benefit that on-demand pay gives the employees, but the solution is also highly advantageous to companies that decide to implement it. It helps recruit new employees and maintain the existing ones. It also gives companies a significant competitive advantage, as according to Artur Rzepka: “This is a very attractive benefit for employees, which at the moment allows employers to stand out, and in the near future will be a standard position in the incentive package of most companies.”

The opportunity for developing such a business solution presented itself in Poland, where there are 16 million people in the labour market. But, Flexee is exploring the options for further expansion. Artur Rzepka predicts that their chances for entering markets are good: “Flexee, thanks to the fact that it already has a finished and tested software, has a great chance to take the leading position in this segment that is being created just now, and thus gain an advantage over the competition that is yet to emerge.”

The money already raised will undoubtedly help the company stand out in the market. CEO of Flexee mentions: “Most of this money will be used as Flexee’s working capital to pay advances to our customers’ employees. In other words – to service our customers. The remainder will cover operating costs, including faster growth and innovation.” Later this year or in 2023, Flexee is planning to close a larger A round, hopefully allowing them to expand into the European market.

Agata writes content for NGOs, private and public sector. She enjoys writing about new technologies and is fascinated by all things AI!