Extended battery life, telemetry packets, Connection-less  Sensor Data, Generic Advertiser, improved form-factor and more – these are what the new generation of Estimote’s beacons has to offer.

On February 24, 2016, Estimote, a beacon tech company, announced the introduction of beacons: namely the Estimote Development Kit with Location Beacons. They come in three fun Estimote colors: Lemon Tart, Candy Floss, and Sweet Beetroot. They are also available in white for bulk orders.

“We’ve always believed that beacons are tiny computers. With their firmware upgrade last year, all Estimote beacons were enabled to broadcast not only Apple iBeacon packets but also Eddystone, an open beacon format from Google. Because of the battery limitations it was possible to advertise only one beacon format at a time,” says Estimote in the blog post. 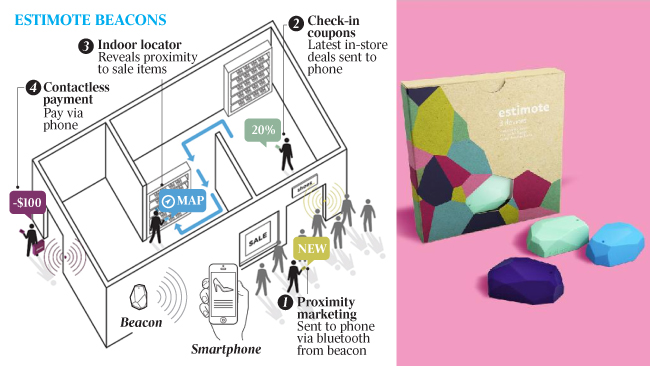 The new beacons are in fact new, improved, and more robust products, featuring:

To optimize battery consumption in the new beacons, the entire firmware has been rewritten from scratch. New beacons are able to broadcast multiple packets (iBeacon, Eddystone, Estimote Telemetry) simultaneously. Innovators building their beacon networks shouldn’t worry about beacon formats and compatibility. That’s why our product will support them all, at the same time.

As a result of power optimization with the new product, battery life has been extended up to 7 years on default settings, and up to 3 years in iBeacon mode with broadcasting settings cranked up for maximum performance. Thanks to the built-in Real-Time Clock and ambient light sensor, battery life can be extended up to 10 years with power management tools, including scheduled advertising, Dark To Sleep mode, and Smart Power mode.

Being able to advertise multiple packets at the same time, Estimote couldn’t resist bringing more context to their mobile SDK and have thus created robust telemetry packets. All new Estimote Location Beacons can advertise non-connectable Estimote Telemetry packets, consisting of sensor data (temperature, motion, light, magnetometer, GPIO) and battery level. The SDK can read and parse these on the fly.

With the redesigned firmware, new beacons are capable of much more than only broadcasting existing beacon formats. With Generic Advertiser, it is possible for developers to create their own beacon formats and data structure. Thanks to the built-in General Purpose Input Output (GPIO) it is also possible to prototype connected objects, and feed advertisers with external device data. Prototyping a smart door lock, connected lamp, or intelligent fridge with the new Estimote Dev Kit will be easy like never before.

Building an online-offline bridge requires not only software innovations, but improvements in the form factor and an obsession with large-scale deployments. All the new beacons have a built-in intelligent adhesive tape layer. It sticks to any surface, and for the first 45 minutes beacons can be removed and repositioned freely. After that time, beacons will stick permanently.

With the rewritten firmware, we have completely redesigned the security architecture. This means improved authentication and a new firmware upgrade mechanism. New beacons have been already tested with massive commercial deployments and are available for bulk orders. Thanks to the new manufacturing process, it is possible to pre-configure beacons with UUID, Tx power and other settings before shipping.

So many innovations – exactly the same price

The new generation of Estimote Location Beacons will have the same price as the previous generation and will cost $99 for 3 beacons in the dev kit. You can pre-order them here.