Skriware, a Swedish-Polish manufacturer of 3D printers, has finally made its way to Kickstarter. The goal is $100,000; the startup has so far been doing well.

Ready to take the project to the next level, Skriware, a Stockholm-based startup that specializes in developing home 3D printers, decided to enter Kickstarter to raise SEK 440 000 – an amount that will allow the company to start the full-scale production. The crowdfunding campaign was launched in the second week of November, now, with 48 days to go, Skriware has already got over a half of the money pledged (SEK 297 189) and 149 backers. 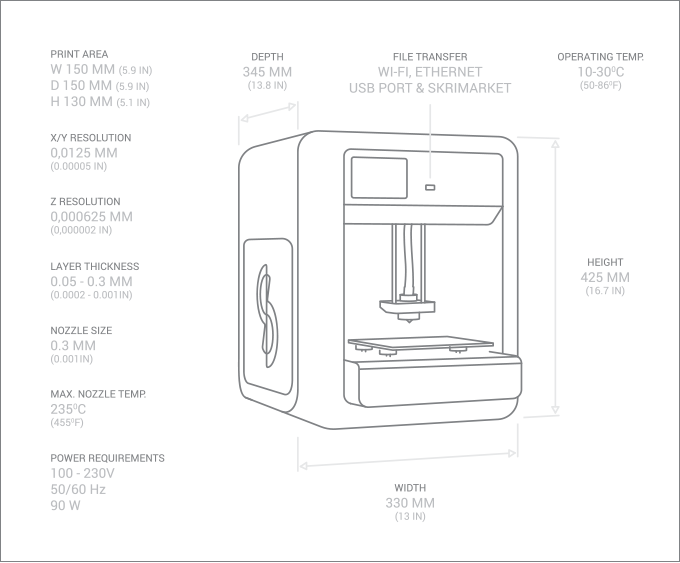 “We turn 3D printing into an everyday activity. Our printers enable printing straight from the online marketplace with just one click!” reads the company’s description on the campaign website. Indeed, unlike the most Kickstarter projects, Skriware has a fully functioning product, and this probably is one of the reasons for such a massive monetary support. The other reason might be that Skriware highlights the intuitiveness and the user-friendliness of their printers, advertising the devices as “the first home 3D printers for everyone,” that are “ready to print” and “finally make one click printing possible.” The startup also stresses that there is no need for an expert knowledge or complicated software as “the model is transferred to the printer via WiFi and immediately printed.” What is even more: thanks to the removable magnetic bed there is no need to struggle while moving the prints and the built-in full-color touchscreen makes operating the printer really intuitive. Skriware printer has a maximum build volume of 5.9 x 5.9 x 5.1 inches and offers up to 50-micron print layer resolution. It’s durable body is made from high-quality materials adding to its sleek design.

“3D printers will soon be as common and popular as regular printers. They will be present in most of modern households. Skriware wants to bring this future closer and make it possible for everyone to start using 3D technology right away. – said Daniel Losinski, CEO at Skriware. With such a usable design and helpful features, 3D printing with Skriware is going to be a child’s play. To make it even easier for inexperienced users, Skrimarket will offer ready-to-print models that will not only simplify printing itself, but above all, will make everyday users realize what they can actually do with the 3D technology. – he added.

If the enthusiastic reception of Skriware doesn’t wear off, the company will have enough funds to expand its 3D printers offer, develop new functionalities and finally – start the mass production. Receiving your brand new Skriware 3D printer is getting more and more realistic.