Polish startups have raised more money in Q1 2021 than in any given full year ranging between 2010 and 2018, according to a report published by PFR Ventures and Inovo Venture Partners.

In the first three months of the year, a total of 65 funds invested 53 million EUR of capital in 93 companies. While the total value is slightly lower than the first quarter of 2020 (58 million EUR), it surpasses the yearly totals recorded throughout most of the past decade and paves the way for future growth. 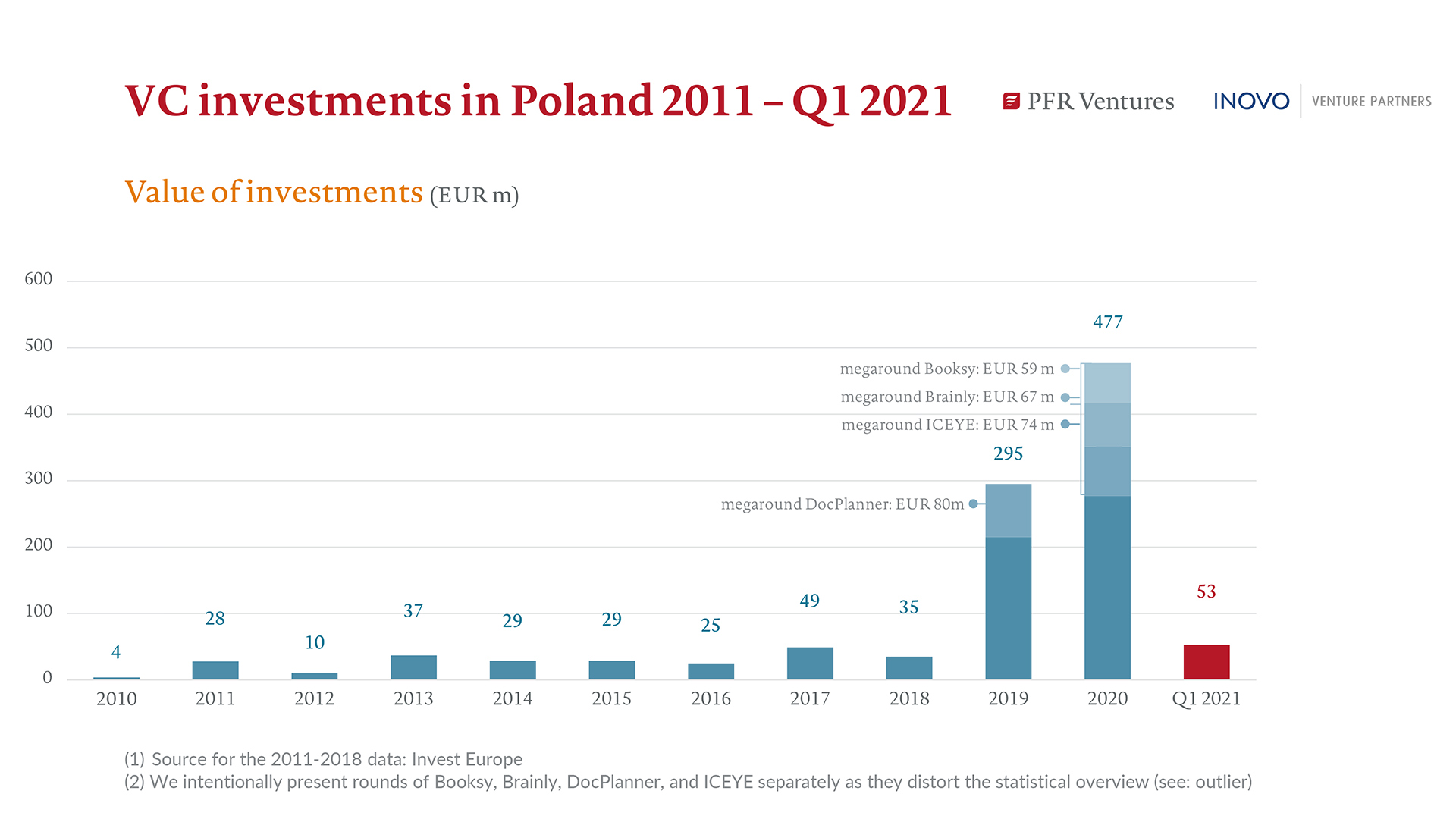 Total value of VC investments in the Polish market in the last 10 years
Note: Image compiled using data from the Q1 2021 Report and the 2020 Report

“We expect long-term growth, even if the overall value of VC investments in Poland in 2021 won’t be significantly higher than in 2020. We are still at an early stage of the ecosystem, but we have a huge potential in terms of the number of startups”, Andrzej Daniluk told ITKeyMedia. Daniluk is an investment analyst at PFR Ventures and one of the authors of the report.

Let’s have a closer look at the figures:

The quarterly number of transactions is steadily increasing (+40% year-on-year), however the invested capital is not keeping up, in fact the value has dropped a bit, thus pushing the average transaction value down (-2.5% YoY).

As it is still young, the Polish VC market is dominated by pre-seed and seed investments, explains Daniluk. “In the last quarter, they have accounted for 88 out of 94 rounds. The average value of an early-stage investment usually stays at the same level, so it’s the later-stage rounds that make the difference. We only observe a couple of them every quarter and they can impact the average transaction value for the whole market.”

International funds have become increasingly interested in Polish startups. 2020 saw three large 50+ million EUR investments, making up 42% of the year’s total, including Booksy‘s 59 million EUR round led by Cat Rock Capital (US), with participation from ENERN (Czechia) and Piton Capital (UK); Brainly raised 67 million EUR from American investors Learn Capital and General Catalyst. In 2019, US giant Goldman Sachs and UK-based One Peak Partners led an 80 million EUR round for DocPlanner.

Daniliuk anticipates two different trends with regard to international funds: “We expect them to invest at even earlier stages. On the other hand, we have witnessed dozens of startups raising pre-seed and seed rounds, so we also expect to see more later-stage investments in the upcoming years”, he added. 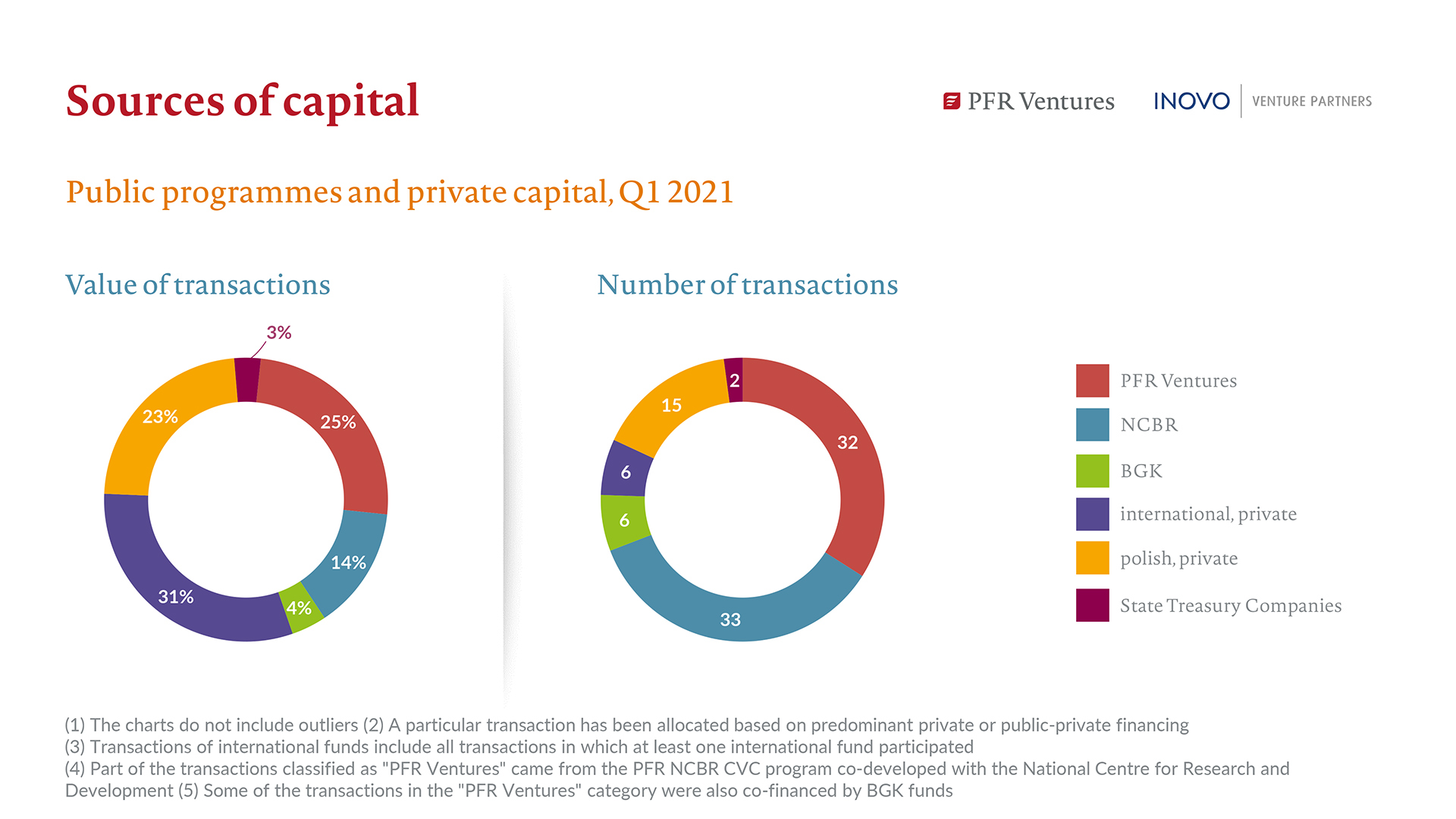 Sources of capital for Polish market VC investments in Q1 2021

The largest transactions during the first quarter of the year did not surpass 5 million EUR and only three of them accounted for Series A. 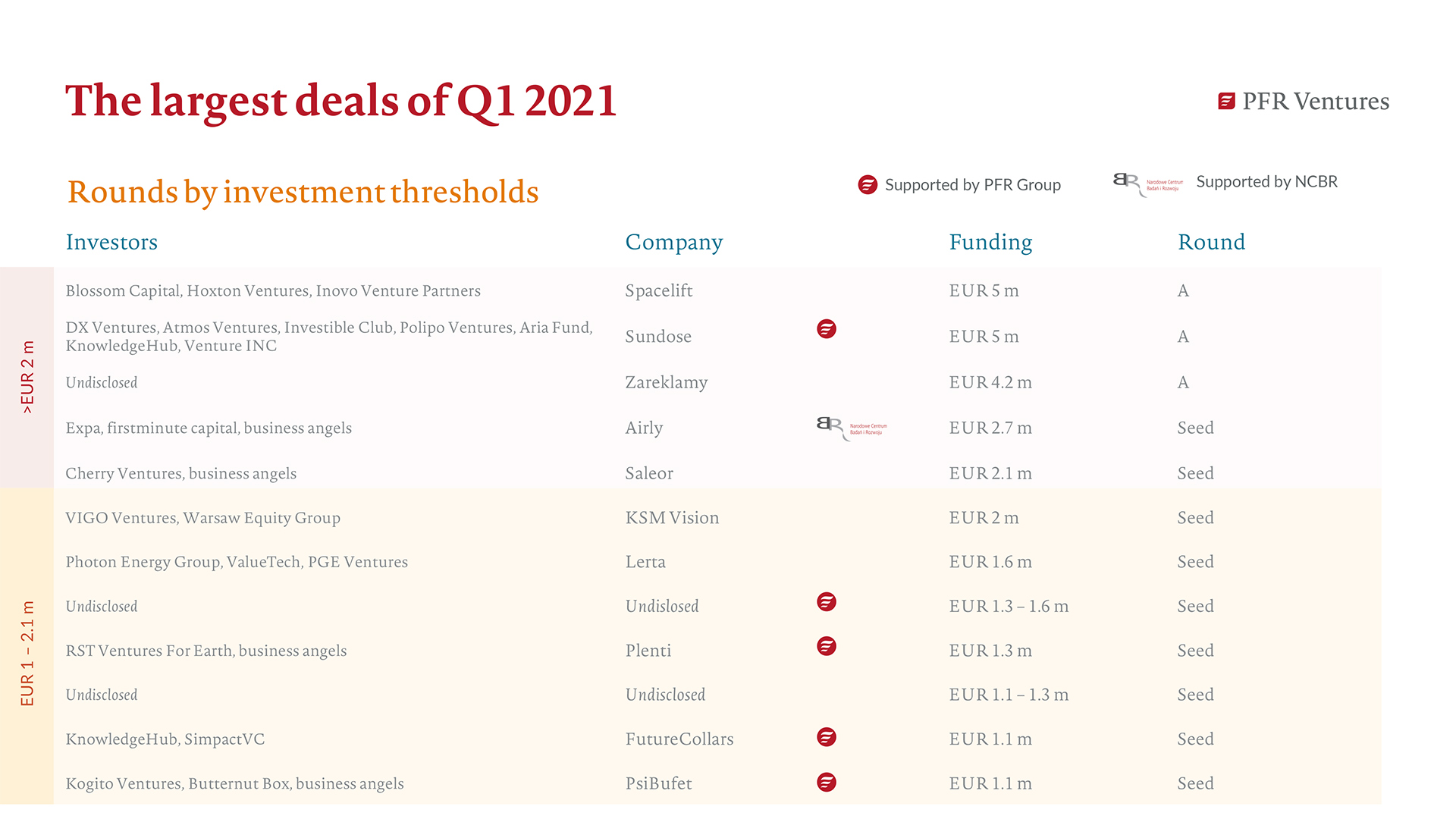 The largest transactions on the Polish VC market in Q1 2021

PFR Ventures invests in venture capital funds, making it “a fund of funds manager”, according to the company. They have a portfolio of 55 funds, which have invested in 372 companies. With 2.5 billion PLN (approximately 549 million EUR) under management, their portfolio includes names such as Atmos Ventures, Avia Capital, Cofounder Zone, Innovation Nest, Movens Capital, Smok Ventures, Tar Heel Capital Pathfinder.

Inovo Venture Partners manages 200 million PLN (44 million EUR) in assets, and focuses on Late Seed and Series A investments in Poland and Central and Eastern Europe. The fund has invested in 18 tech startups, including Booksy and Spacelift, and has plans for another 15 in the next few years.

After Rebrading from FitQbe and Securing a Seed Round from Grupa Pracuj, Polish Startup Worksmile Seeks to Improve Its Employee Well-being Platform - ITKeyMedia